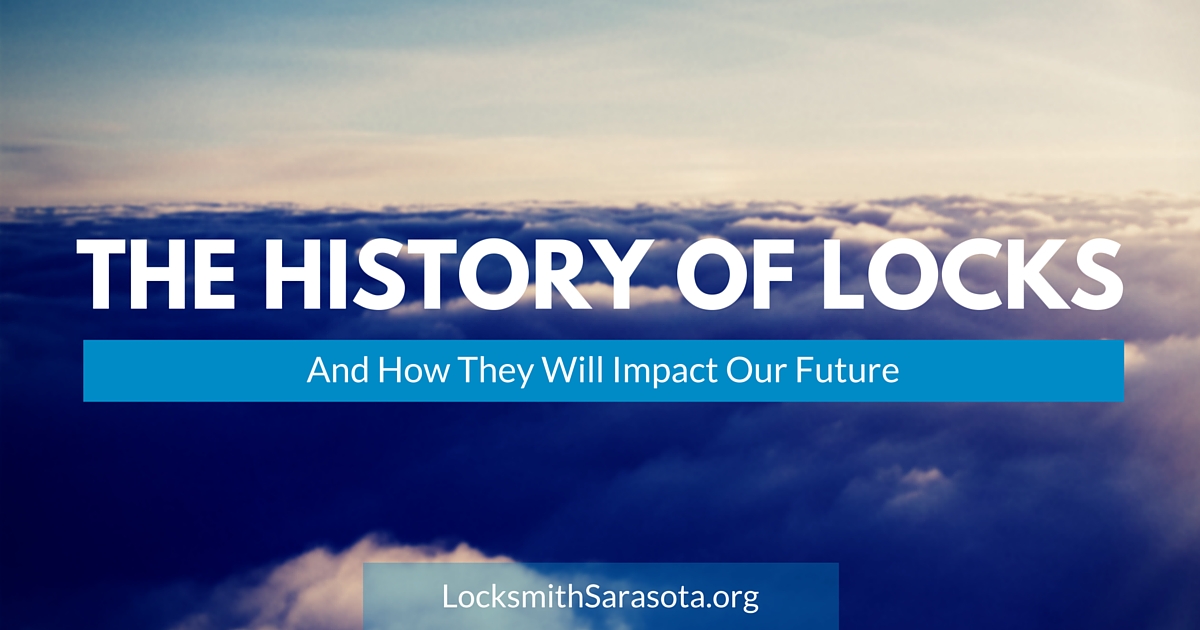 Locks and keys form part of our everyday lives, but how often do we stop to think about them? Most of the time they exist only in the background, until something happens to them and we can’t access our stuff. The other time we think about locks is when our security has been breached and someone has damaged or destroyed our things, or taken them outright. All of these scenarios point to the importance of locks in our lives.

A Brief History Of Locks

Locks have been around for thousands of years. From the time the first human had something worth keeping, they were looking for a way to keep that item secure.

The first evidence of a lock designed to keep something secured dates to about 6,000 years ago. It was fashioned in Mesopotamia, which today is made up of modern Iraq, as well as parts of Syria, Iran and Turkey. A wooden pin lock was used during this time to keep possessions secured, as well as a means of keeping track of who was coming and going

Modern-day Iraq is also the birthplace of the pin lock. Archaeologists discovered a basic lock and key system while on a dig at the Palace of Khorsabad in the 1800s. The find dates to 4000 BC and its wooden design shares some basic similarities with modern locks.

Here’s how it worked: Pins of different lengths inside the lock mechanism would stop the door from opening unless the correct key was inserted in the lock. Only the correct key would push the pins up and move the wooden bolt holding the door securely in place could be pushed out of the way.

Metal was first used to fashion locks using the same basic design developed in ancient times during the Middle Ages. Locks had a keyhole with a cylinder on their far end. The keyhole featured a series of wards, or concentric plates, that would be able to block a key from turning unless it had the correct pattern of notches to match they pattern or wards. If the key turned freely, it would engage the bolt when turned.

The Industrial Age of the 1760s saw power-driven machines replacing hand tools. During this period in history, Robert Barron patented a double-acting lever tumbler lock. His design required between two and four separate levers to lift to separate heights in order for a lock to be opened. These locks were more secure than anything on the market to date, but they could still be picked.

In 1784, Joseph Bramah patented his design for a lock that is still in use in London today. It uses a cylindrical key to press a number of wafers inside the locking device. The correct key hits the wafers and will retract the bolt.

Inventors like Chubb and Schlage improved upon these lock designs, adding their own innovations. Linus Yale, Jr. added the flat grooved key with a notched edge that we are all familiar with for residential locks.

The Future Of Locks

Our need for security has not gone away, but the way we keep things secure is ever-evolving. The future of locks will likely involve doing away with a physical key, which can be used by anyone who has access to it and can become lost.

Instead, digital locks are becoming more popular. We already have locks that can be programmed to use passwords, codes or fingerprints for authentication methods. Facial recognition software is now available to open some doors. Lock companies are also experimenting with technology that will allow you to open a lock with your smartphone or the sound of your voice.

In the meantime, you can trust Locksmith Sarasota for all your residential and commercial locksmith needs. Call us today if you want to replace or update your existing locks.

I’m the owner of Locksmith Sarasota. My company provides full mobile local locksmith service all over the Sarasota area. We always offer reliable and professional service with fair prices and a friendly attitude. Whenever you need a local locksmith in Sarasota, please give us a call and me or one of my technicians are going to be there for you.

We are happy to provide a 10% senior and military discount. We are glad to provide financial assistance to those who may need it as well. We are always ready to help our community. Backed with our many years of experience in serving the city, you can rest assured that you are in good hands. Call us for the best locksmith service in Sarasota!

Have you experience being locked out of your car? Sure, this is embarrassing, but worse is that you cannot get into your car and drive where you need to be. We are help to help you out. Locksmith Sarasota is the best way at opening your car or truck without having to break the window.
Read More

Did you forget the keys on your house? Are locked out for your home? Regardless of the time of the day and night, we can get to you to help you get inside your house. Also, we offer new door locks installation to ensure that the safety and security of your property and family are protected against burglars and other intruders.
Read More

Have you transferred to a new office in Sarasota? Do you want to make sure that your commercial business establishment is secured? Call Locksmith Sarasota and we will install new locks to your office to ensure that no one can enter your property without your permission.
Read More

As a family owned company, we are flexible at our pricing. We are licensed, bonded, and insured and have had worked with a number of clients in the greater area of Sarasota FL. Contact us for all your locksmith service needs and we will gladly attend to your needs our best ways possible.
Need an Affordable and Reliable Locksmith?
Give Us a Call Today and We Can Be There in Less than 25 Minutes
Call Now: (941) 281-4100
© Copyright 2023 Locksmith Sarasota | All Rights Reserved | Sitemap